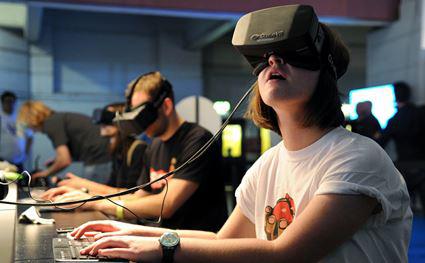 On Friday morning, my cohort at Startup Institute had a fireside chat with Aaron Nicholson, who is involved in the growing industry of virtual reality, or VR.

Now obviously, since this person was invested in the development of VR, he had a lot to say about the ways virtual reality can be used in gaming, film, health, psychology, and other such fields.

And, even having not experienced the Samsung virtual reality goggles that were passed around, I could see how this was intriguing technology, an extension of something we’ve tried to achieve for years with books, with film and games, 3-D Imax films, theme park rides – an immersive experience in another world.

And yet, there was a niggling in the back of my head – a scene from the novel Fahrenheit 451.

I first read Fahrenheit 451 nine years ago this month (which is SUCH a strange thought). I was away from home for the first time at a choral studies camp in middle-of-nowhere upstate New York, and it was required reading for school, which I figured I would get through while I was waiting for Harry Potter and the Deathly Hallows to be released.

The 1950s novel of a “near future” America where books are burned drew me in. I loved his wonderful and thoughtful language, the clear love of books spilled onto the page, the growth of rogue book burner Guy Montag, and the soul, wit, and heart of Clarisse McClellan.

What also stayed with me were the negative images, the worries and warnings science fiction often meditates on, especially in modern dystopias. The world of Fahreheit 451 is a lot closer to home than The Hunger Games or The Maze Runner, however, in that the society is quite recognizable. Robotic hounds, wall-sized TV screens, a tiny radio you can put in your ear – much of this tech is either close to existing or already there.

The scene I was thinking of, in this instance, had to do with the wall-sized television screens, called “parlor walls,” the intent being to eventually have enough money for four parlor walls, making the room an immersive TV parlor, which is what the main character’s wife, Mildred, wishes to do.

She calls the characters on her screens “family,” and even, at the top of the novel, participates in a play that comes on the “wall-to-wall circuit,” with the intent that one part is written out and Mildred can read a script and “interact” with the characters.

Are you starting to see why the concept of virtual reality made me think of this? Made me worry about this?

Mildred and the general population of this world are all so caught up distracting themselves from the world and anything of deeper meaning, they escape into shell radios and TV parlors, drive so fast one can’t see anything but super long billboards. They think anyone who wants to own books, or think for themselves, or be out in nature, must be clinically insane.

Bradbury wrote this book, as many science fiction writers do, to try to prevent such a future. And I couldn’t help wondering, for all its potential benefits, could widespread virtual reality bring it about after all?

Like the parlor walls, virtual reality is intended to be an immersive experience. Actors can appear to be talking directly to you, a world of sights and sounds brought to life around you, which moves as you move… and you don’t even have to stick screens on a wall. And the technology is only going to get better, more realistic. How many will prefer a virtual world to a real one?

Hold on, I tell myself. Breathe. Let’s not get carried away.

The reservations are justified, sure. But aren’t these exactly the kind of things that have been said about every new technology? That’s why so many superhero comic stories were about some great invention for humanity that fell into evil hands, was corrupted, and had to be destroyed by a superhero.

Novels were said to give women bad ideas.

Radio, film, and television all said to be corruptive mind-numbing technologies that would bring about the end of civilization.

People my age still get lambasted for smart phone usage by older generations, while said older generations can be just as susceptible to the distractions of game apps if they try it once or twice.

And every new technology does get abused in some way – I won’t pretend that television didn’t change the way we look at presidential elections among other things, or that excessive cell phone use doesn’t often lead to disconnect, distraction, even death if texting and driving. Here’s the thing, though.What most people remember about Fahrenheit are the book burnings and censorship.

What they don’t remember is why the censorship was there in the first place.

The society in the novel wanted the books gone. If they tried to read, they didn’t understand the value. “…now do you see why books are hated and feared? They show the pores in the face of life. The comfortable people want only wax moon faces, poreless, hairless, expressionless.”

Now some of this does ring true for a modern society. Television and media does present images of perfection that we may strive too hard to achieve, and can lead to a complacent level of comfort.

But Bradbury, in Fahrenheit 451, hated television for its potential ability to blot out intellectualism, reality, relationships, and individual thought. And considering what television was like in the 50s, who could blame him?

Yet, think of the most acclaimed television shows now. Think of the challenging discussions modern television has incited, the ability it has to show us other walks of life. Think of the communities formed around certain shows, who chat online and gather at conventions. Sure there are still problems with representation and filtered news media, but in general, I think we’ve done a good job of avoiding the fate Bradbury wrote for us thus far.

Earbuds may be the modern equivalent of Bradbury’s shell radios, but self-selected music, audiobooks, and diverse podcasts rule the soundwaves, not corporate radio. The billboards, the old way of marketing, aren’t getting longer – they’re kowtowing to the internet, which places the power in more peoples’ hands. The cell phones so insulted can connect, rather than isolate, people across the world.

My point is, perhaps it is not virtual reality or any specific technology we need to be wary of, but the society that might encourage its use for wrong. Or even just for nonsense. That is why, I think, we need science fiction. To warn us of potential futures, but also to give us means of avoiding them.

It is with this in mind that I can accept virtual reality as a growing technology. But it is up to all of us to keep things in check, and not sacrifice what is really important in the face of sometimes overwhelming tech advancements.

Perhaps I should go into writing scifi?